by admin
LPOF is looking forward to the first concert of this year’s festival, in collaboration with St. Mary’s Cathedral, Limerick, and Limerick Sinfonia: 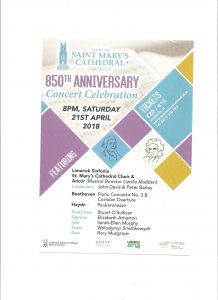 This concert will showcase wonderful local classical musicians, and is also a celebration by Limerick’s classical music community of the 850th anniversary of St. Mary’s Cathedral.

Limerick Sinfonia is a fairly new orchestra to the region in that it was founded in 2014, and gave its first concert as part of the Limerick City of Culture celebrations that year. The orchestra aims to give an opportunity to up and coming musicians from Limerick and the surrounding area, together with established local orchestral players, to take part in orchestral music making at a professional level. The orchestra has its origins in the Limerick School of Music, and two of its original founding ‘leading lights’, Stuart O’Sullivan and John Davis, are closely involved in this upcoming project – Stuart as piano soloist and John as conductor.

We are very grateful to the School’s Principal, David O’Connell and Deputy Principal Cecilia Madden for their support and encouragement in taking this project forward.

Given the strong and ever growing tradition of classical choral music and singing in Limerick, and the cathedral’s own choral tradition dating back many centuries, we were keen also to include a major choral work in the concert programme for 21st April.

We chose one of Haydn’s late great masses, written when he was in his mid-60’s – the Mass in Time of War (Paukenmesse). We are joined by a team of soloists who between them celebrate local, national and international acclaim. The chorus is made up of celebrated Limerick chamber choir Ancór and St Mary’s Cathedral Choir. We are very grateful to the members of Ancór, and their musical director Cecilia Madden for taking part in the project. Without their commitment and input the choral element of the programme could not have been put together so successfully.

This concert is part of a year-long series of diverse events – religious, musical, historical, and community – to celebrate the 850th anniversary of St. Mary’s Cathedral. These events are being devised and curated by St. Mary’s Cathedral’s new Dean, the Very Revd. Niall Sloane.

This concert has been made possible by the generous support from the Limerick City and County Council Festival and Events Scheme, and also the support of the Limerick School of Music, the cathedral itself and in association with the Limerick Pipe Organ Festival.

Essentially what we have here is some major musical masterpieces guaranteed to thrill and delight any listener, from beginners to cognoscenti!

This music by Beethoven and Haydn is full of energy, surprise and imagination, taking the interested and engaged listener on a wonderful journey, from music that is imposing and sombre to music brimming with effervescence and joy.

You will be very sorry if you miss this concert!

This year is the 850th anniversary of the foundation of St. Mary’s Cathedral (1168), and St. Mary’s Cathedral, Limerick Sinfonia, and Limerick Pipe Organ Festival will be collaborating to celebrate the occasion. We are delighted to announce that several beautiful concerts will be held in Limerick over the coming weeks, including:

Tickets for this event are now available from UCH, www.uch.ie. Early booking is strongly advised to avoid disappointment!

Further details of all of the events may be found at: 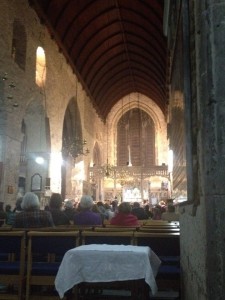 Thank you to Bernadette Kiely and to Peter Barley for their beautiful recitals on Friday night, Culture Night 2017. Thanks to everyone who attended, and to St. John’s Cathedral and St. Mary’s Cathedral for hosting the events; we greatly appreciated your support. 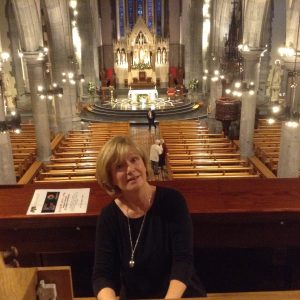 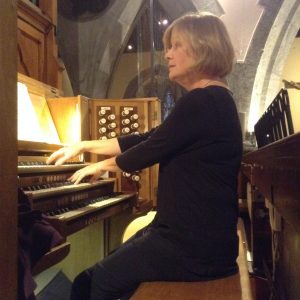 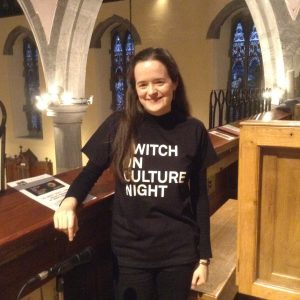 Cultural events will be taking place nationwide this Friday night, 22nd September, to celebrate Culture Night 2017. LPOF is delighted to be involved again this year, and has organised two recitals for the occasion.

The first recital will take place at St. John’s Cathedral from 7PM to 7:30PM. Cathedral organist, Bernadette Kiely, will perform some organ favourites, including Bach’s Toccata and Fugue in D minor and Widor’s Toccata from Symphony no. 5. This concert will be preceded by a talk on the Cathedral’s stained glass windows at 6:30PM. Admission free, all welcome! 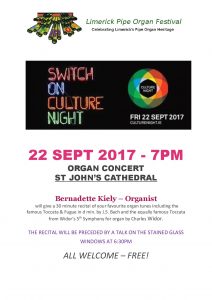 The second recital will take place at St. Mary’s Cathedral, Bridge Street from 8:30PM – 9PM. Peter Barley, Cathedral Organist, will perform music by French composers César Franck and Jehan Alain, both renowned for their organ music. St. Mary’s will celebrate its 850th birthday in 2018, so do come along to see what both this Limerick landmark building and Limerick Pipe Organ Festival have to offer! 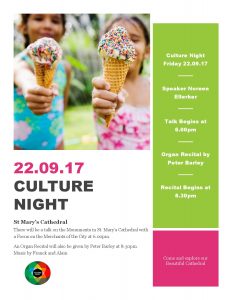 Hope to see you there!

Thanks to all of our performers and participants for making this year’s Pedal Power such an enjoyable experience. Thanks also to Limerick Smarter Travel and to the host churches and cathedrals who so kindly facilitated us.

Below are some pictures from today’s Pedal Power tour. Our next LPOF event will be recitals by Bernadette Kiely and Peter Barley on Culture Night, Friday 22nd September. More details to follow. Looking forward to seeing you then! 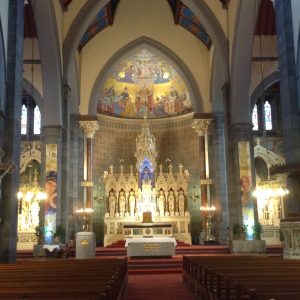 In advance of the tour at the Redemptorists. 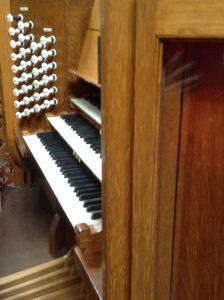 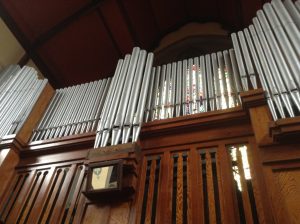 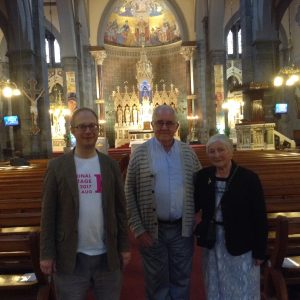 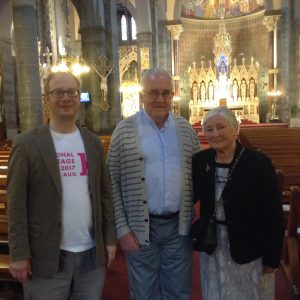 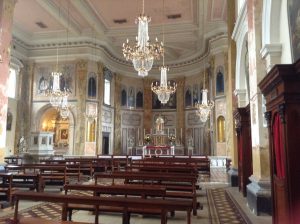 Sacred Heart Church in advance of the tour. 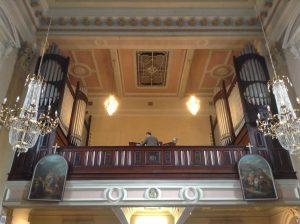 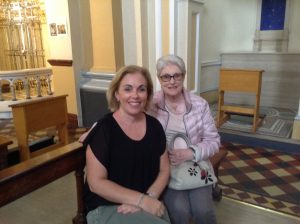 Mary and Janet Heffernan at the Sacred Heart Church. 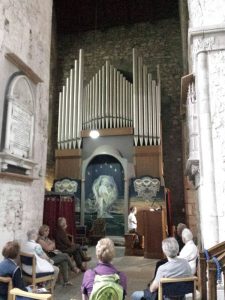 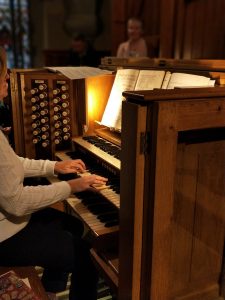 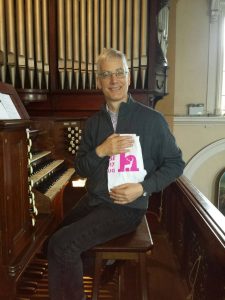 Fr. Columba McCann, OSB, before his recital in the Sacred Heart Church. 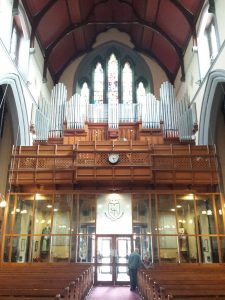 Organ in the Redemptorists. 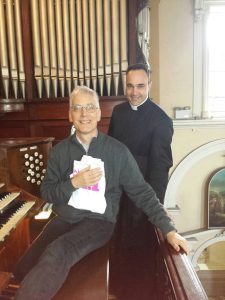 Fr. Columba McCann, OSB and Canon Wulfran Lebocq in advance of the recital at the Sacred Heart Church. 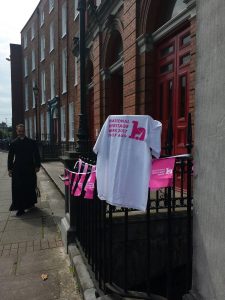 Outside the Sacred Heart Church. 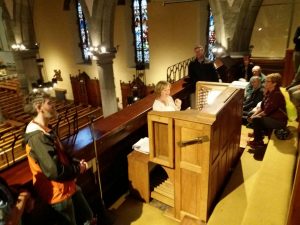 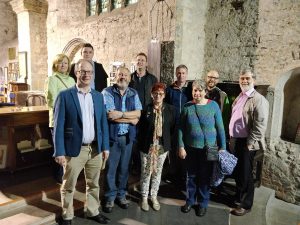 Some of the participants in the tour of St. Mary’s Cathedral.