We’re really looking forward to Culture Night this Friday, 16th September! Come join us in St. John’s Cathedral at 8:30PM for a short recital by cathedral organist Bernadette Kiely featuring some organ favourites and a surprise (or two)!

Bernadette has been organist at St. John’s Cathedral since 2001 and choir director since 2008. As a founding member of Limerick Pipe Organ Festival, Bernadette continues to promote ‘all things organ’. 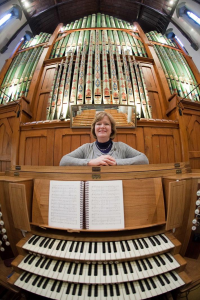 If you would like to participate in our upcoming improvisation masterclass with Martin Baker, please save this blank form, fill in your answers, save changes and e-mail to info@lpof.ie

Martin Baker is Master of Music at Westminster Cathedral. A taster of his wonderful skills of improvisation can be found on Youtube:

Limerick Pipe Organ Festival, in close collaboration with Limerick Smarter Travel, is launching a new venture for Heritage Week called Pedal Power. Two separate tours will visit Limerick’s two cathedrals and in addition six other churches across the city – all venues being chosen because they have pipe organs. Local organists will play a short recital, alongside a historical snippet and story or two from speakers including Canon O’Malley and Noreen Ellerker.

There is also an in-built bit of exercise! You can choose your preferred mode of transport – we suggest bicycle, but walking or shared car for instance are also fine. Those who successfully complete the tour will be rewarded with free ice cream!  Fine buildings, good music and free ice cream – what more could anyone want?!

Also on www.LimerickSmarterTravel.ie and www.heritageweek.ie

Limerick Pipe Organ Festival is delighted and privileged to welcome the Carice Singers to St. Mary’s Cathedral, Limerick. The Carice Singers, an ensemble comprised of some of the UK’s finest young professional singers, will perform on Saturday, 13th of August at 5PM. Admission is FREE, with a retiring collection. Directed by George Parris, their programme explores romantic choral music from the fringes of Europe, and includes music by Sibelius, Bantock, Delius, Kuula, and Grieg. A taster of the ensemble’s wonderful talent is available at: https://www.youtube.com/watch?v=mzyQOQRSbu4

Come along and enjoy this free recital in the beautiful and peaceful ambience of Limerick’s iconic St Mary’s Cathedral.

The Carice Singers are an ensemble comprised of some of the UK’s finest young professional singers, noted for their “freshness of tone” and “careful musicality” (Gramophone). Named after the daughter of Sir Edward Elgar, the choir aims to bring an imaginative approach to choral music of the Romantic period and beyond, frequently drawing upon the latest academic research to produce original and insightful programmes. Since their foundation in 2011, they have given over 30 performances across the UK and Ireland, and have made several critically acclaimed recordings for the Naxos label. Their most recent recording, of music by John Ireland and E.J. Moeran (who was Irish by descent) was recently launched at a concert in London.

George Parris is a singer, conductor, and student of early‐twentieth‐century Anglo Irish music. His commitment to this repertoire has been recognised by, among others, the Peter Warlock Society, the John Ireland Charitable Trust, and the Elgar Society, who awarded him with a Certificate of Merit in 2011. In the same year, he founded The Carice Singers, and has since directed the choir in a number of concerts and recordings, many of which have received excellent reviews. He has recently completed a Master’s degree at the University of Oxford, in which he focussed on the ‘Irish’ music of Sir Arnold Bax.

Many thanks to David Cassan for his beautiful recital last night. His wonderful music and stunning improvisation were an appropriate finale to an incredible day of culture in Limerick city, as Limerick made its bid to be European Capital of Culture in 2020. Photos from the concert are now available in our gallery, courtesy of Aoife Daly. LPOF is very grateful for the sponsorship received from the Mayor’s Charity Ball 2014 for this concert. The committee also greatly appreciates the continued support of Canon Lebocq and the Sacred Heart Church, as well as the kind support of the George Hotel, Limerick. 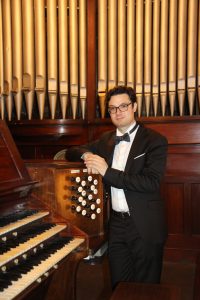