Our first exercise was a simple call and response body percussion piece of music, which elicited the fantastic amount of prior knowledge the girls had about music. Within minutes, the board was full of words such as tempo, dynamics, pitch, beat, pulse, volume, rhythm etc.

We then moved on to our first listening piece of the day, La Réjouissance from the Royal Fireworks. We had a short discussion prior to this explaining that the Monarchy would have employed the most reputable and famous composers of their time to create music for them.

A live recording of the BBC Symphony Orchestra playing La Réjoussance from Music for the Royal Fireworks, featuring live fireworks was played. This recording was taken from the Queen’s Jubilee celebrations in 2002. The 5th class girls also showed off their mental maths skills by working out how long the Queen is now Queen of England.

We responded to the music through art by picking loud and soft colours to correspond to the forte and piano sections of the music to create our own artistic firework displays.

We then used these pieces of firework paper as our own paper percussion orchestra to keep the beat to Katie Perry’s song Firework. The girls demonstrated their improvisatory ad creative skills by devising different ways of playing the paper to show the duration of the different note values. In fact the girls not only played along with the song but in fact gave a splendid rendition of singing the song and were in fine voice.

This led us on to Stand By Me – a song that was chosen by Harry and Megan for their wedding. As there was no commissioned piece for this Royal Wedding, we decided to have a look at the piece of music that was most out of the ordinary for a Royal wedding in England.

Once again the girls excellent at listening and responding to the recording from Harry and Megan’s Wedding and it was not long before we were singing the riff of the song to the words ostinato. Some individual girls put themselves forward to sing the verses of the song while their classmates kept singing the ostinato.

As with all of the music chosen it was noted that all of this music was more than accessible to the organ and indeed there are many pieces of orchestral music, like Music for the Royal Fireworks, that have been transcribed for organ. Also Stand By Me, owing to its compositional structure could work very well on the organ, with the ostinato theme being covered by the pedal, and the sustained harmonies underneath the solo voice being played on the swell manual. This was then demonstrated to the girls in the afternoon at St. John’s Cathedral.

All of the above was achieved before small break. After small break we had some great fun making our own musical instruments. While some groups busily began in earnest sizing pipes, applying balloons to tops of cups and navigated applying mouth pieces to their instruments, others were busy drawing and decorating pipes of their own as I had brought some antique pipes from the organ of St. Francis Church Cork with me to Limerick.

The girls thoroughly enjoyed making their instruments and were soon warming up for their very own composition. Using some simple rhythmic and compositional techniques the girls had quickly composed a delightfully dramatic and punchy music fanfare of their own, most certainly fit for a Royal Wedding!

Once the instruments were made and the practises were completed we headed over to the Organ Gallery of St. John’s Cathedral. Events began with a playing of Fanfare by William Mathias. Mathias was the composer commissioned for Prince Charles and Diana’s Wedding so in terms of fitting into our theme it was an appropriate piece to begin proceedings with.

Once this was finished we performed Katie Perry’s Firework – no doubt a first for St. John’s Cathedral, followed by Stand By Me and finishing with a premiere of the girls own “Squonky Tube” piece.

It was a truly wonderful day of music making and appreciation and I am very thankful to Bernadette Kiely for her encouragement and perseverance in bringing this day to fruition. Many thanks to the 5th class girls of St. John’s GNS and their class teacher Ms. Diane Smyth for their kindness and co-operation for the day.

Below are some thank-you messages from the pupils who attended the workshop: 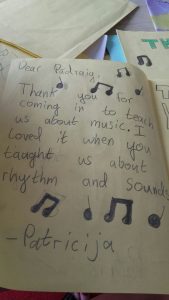 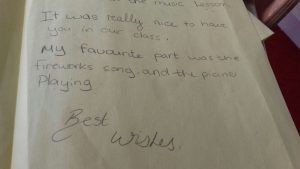 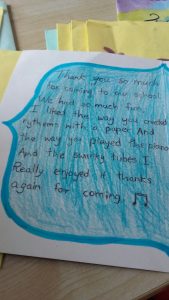 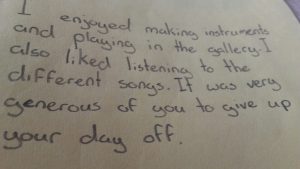 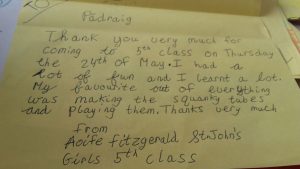